Thank you for Coming!

Captain James E. Stein, Retired is the epitome of an Army Aviator. Following his graduation from Army Flight school in 1969 he found himself in Vietnam with the 335th Assault Helicopter Company, the “Cowboys.” During his 21 consecutive months flying UH-1 “slicks” and the Bravo gunship, assisting U.S. troops in contact he provided life-saving support. Returning to the states and graduating from the OH-6 Cayuse course, he went back to Vietnam in 1972, assigned to the 7th Squadron, 17th Cavalry Regiment, the “Ruthless Riders.” Flying scouts as “Scalp Hunter Lead,” he volunteered to be at the very front lines, flying low and slow to be in position to render assistance, call in artillery, recommend B-52 Arc Lights, and evacuate the wounded, which he did, many times.
On June 19, 1972, he was shot down for the tenth and last time. During an operation northeast of Kontum, while scouting an enemy bunker, his OH-6 “Loach” came under heavy fire. Both he and his observer were wounded, him in the right knee. He maneuvered the “Loach” without the ability to use the pedals due to his injury and safely landed with help from his observer, passing out immediately after landing. His many awards and decorations speak to his valor and commitment:  two Silver Stars, four Distinguished Flying Crosses, two Bronze stars, 94 Air Medals, two for valor, the Purple Heart and the Vietnamese Gallantry Crosses with Gold and Silver Stars.
Legendary aeroscout pilot, CPT (Ret.) Jim Stein is the epitome of an Army Aviator. He is the personification of bravery, skill, and selfless sacrifice in devotion to duty – duty to his country, to his unit and to his comrades. His deeds serve as timeless examples for the generations of Army Aviators that follow. 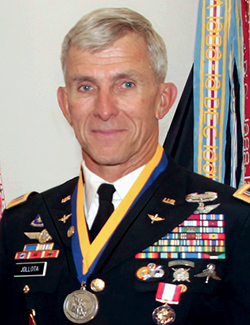 Chief Warrant Officer Five (Retired) Daniel R. Jollota’s accomplishments inspire awe. His 40 years of service, 30 years as an Army Aviator, assigned to every Special Operations Aviation unit, 8,000 flight hours, 3,500 under night vision goggles, tell the tale.
Graduating flight school, he set his sights on the most challenging assignments and missions. After a tour in Korea with the 2nd Infantry Division, he volunteered for the 617th Special Operations Aviation Detachment in Panama, where he was instrumental in securing the western corridor during the invasion of Panama. After a move to Company D, 1st Battalion, 160th Special Operations Aviation Regiment (Airborne) in 1990, he would achieve every level of leadership as a standardization pilot and an assault and attack helicopter flight-lead, proving his mettle under fire during Operation Gothic Serpent. When his MH-60 was struck by a rocket propelled grenade while at a hover, he had the fortitude to hold his position while the remaining rangers fast-roped from the aircraft. After returning the stricken Black Hawk to base, he returned to the fight for a total of 18 hours in the cockpit that day.
He sought more challenges with a special mission unit, and after ten years, was hand-picked to be the commander of the 2nd Aviation Flight Detachment at West Point, New York. His mentorship, professionalism and drive resulted in the integration of the LUH-72 Lakota helicopter into the detachment five years sooner than scheduled. His next assignment was to another special mission unit, eventually serving as the unit’s first Command Chief Warrant Officer, a position he held until his retirement in 2016.
CW5 (Ret.) Dan Jollota is the epitome of an Army Aviator – selfless service, dedication to duty and flawless professionalism. His exploits and accomplishments should be taught to our youngest aviators, an example for all. 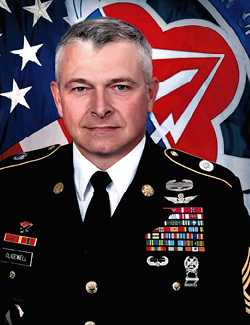 Throughout his 30 years of service, CSM Tod Glidewell, Retired, mentored countless of soldiers and was directly responsible for the professional education of hundreds of noncommissioned officers. He served at every level, crew chief to first sergeant, technical inspector to the U.S. Army Aviation and Missile Life Cycle Management Command command sergeant major, always providing the best leadership for his Soldiers along the way.
As a young soldier his leadership accomplishments were directly responsible for his battalion in Honduras being selected twice as the AAAA unit of the year.
In combat, while serving as the CSM of the 101st Combat Aviation Brigade he led the way, convoying to Mosul in the initial days of Operation Iraqi Freedom. His efforts and mentorship led to a 167% retention rate and resulted in the brigade being selected as the AAAA Robert M. Leich award winner.
BG William Forrester hand-picked him as the first CSM of the Combat Readiness/Safety Center. In this capacity he assisted in the development of a speaking and media campaign that led the Army to the lowest accident rates since the mid ‘70s. This success led to his selection as the Aviation Branch and U.S. Army Aviation Center of Excellence CSM, where he influenced the alignment of the Unmanned Aircraft Systems military occupational specialties and oversaw the modernization of Fort Rucker’s NCO Academy, leading to their selection as the best NCOA in the Army.
His last assignment was as the AMCOM CSM, again leading and shaping the future. He was instrumental in the placement of a sergeant major at Corpus Christi Army Depot, ensuring the standards were upheld and best efforts were produced.
His career demonstrates the effect one person can have on hundreds of thousands of Soldiers and by giving back to the Aviation community and always putting his Soldiers first.