Thank you for Coming! 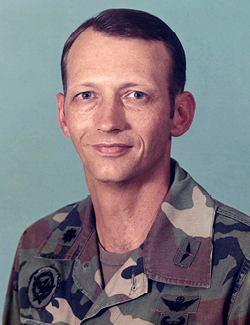 LTC Ace Alan Cozzalio embodied the spirit of Army Aviation and Air Cavalry; past, present and future. He was an exemplary leader and visionary who developed aviation policy and tactics based on his combat experience. He was one of the most decorated soldiers of the Vietnam War. In his two tours, he was shot down by enemy gunfire six times and awarded every medal for valor, except the Medal of Honor, some multiple times.
Following flight school in late 1967 he was assigned to Vietnam, serving with D Troop, 3rd of the 5th Air Cavalry. On January 25, 1969, after extending his tour, he displayed extraordinary and selfless courage when he attacked and destroyed a fortified NVA machine gun bunker that had pinned down a 90-man infantry company for over two hours. After other pilots had made several unsuccessful attempts to destroy the bunker, Ace swapped his AH-1 Cobra for one of the troop’s OH-6s, and with complete disregard for his personal safety, he attacked the bunker head-on with mini-guns blazing, landing on top of it while his crew chief tossed a grenade into the bunker gun port. For his actions, he was awarded the Distinguished Service Cross.
As the role of the air cavalry evolved in Vietnam, he was instrumental in developing scout tactics and later assisted in the development of a combat aviation handbook for the Army. Following Vietnam, he was assigned to 1st Armored Div., and in 1984 assumed command of the 4th Aviation Training Battalion at Ft. Rucker, AL.
In 1987, he medically retired from the Army after 20 years and returned to the family ranch in Hornbrook, CA where he lived until his death six years later at age 46.
Ace Cozzalio’s gallantry and leadership has left a legacy for future generations of Army aviators. 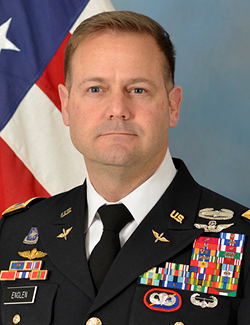 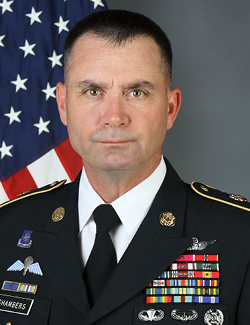 SGM Gregory M. Chambers has been a force in the Aviation Community for over 30 years. He has set and lived the standard as an Army Noncommissioned Officer, and his real passion has always been to guide younger enlisted Soldiers.
He entered the Army on November 2, 1987 and joined the 160th Special Operations Aviation Regiment (Airborne) in 1996. Quickly identified as a unique leader and mentor, he has served on 10 combat deployments supporting the Global War on Terrorism, all with Army Special Operations Aviation. From his initial experience as Green Platoon NCO in Charge to his selection as the Regimental Command Sergeant Major in 2011, he has always excelled.
From 2011-2014 he was 160th SOAR(A) CSM managing five battalions that supported over five Combatant Commands and numerous missions. While maintaining a high operational tempo, he ensured the success of over 2,250 Soldiers and pulled together senior leaders from across the aviation enterprise to provide the capability for real time mission execution.
As CSM of U.S. Army Special Operations Aviation Command from 2014 to 2016, he developed a strong talent management program and supported realistic training opportunities for his units to participate in worldwide exercises. He was subsequently selected as the U.S. Army Aviation Center of Excellence  Command Sergeant Major. Serving from 2016 to 2018, he provided guidance and oversight for three training brigades and two Noncommissioned Officer Academies training over 6,000 Soldiers, warrant officers and commissioned officers annually, and over 500 international students from 18 countries. He helped transform Army Aviation enlisted training, and single-handedly wrote the policy and standing operating procedures to establish the USAACE program that provides up to $650 toward Civilian Credentialing and Licenses to Enlisted Soldiers and Warrant Officers.
His legacy is today’s and tomorrow’s world-leading, flexible, innovative and professional Enlisted Army Aviation Soldier.